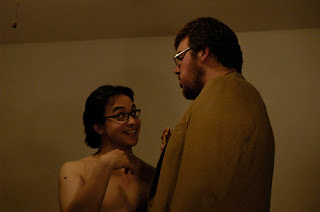 So, the out-of-town preview's always an iffy thing. I'm a big believer in the Not Opening in Minneapolis Until Our Material Sucks Less school of thought, and I have family down there, so it remains a good excuse to drive down, see my folks, and do a few performances.

I can't help noticing that even as our audience in Minneapolis has grown, our audience in Rochester has dwindled, which I suspect is at least partly symptomatic of an evolving style on our part. I've joked that I'm the most conservative artist in Minneapolis, and the most liberal artist in Rochester. It's amazing the degree of culture shock that can take place over a 90-minute drive. And I'm saying that as someone who's been to China.

That said, this ranks among our more successful previews, and I'm pretty sure it's because of the variety-show format: it's the only show we've really done without some complicated, cerebral layer to penetrate, or that requires you to know who, say, Snorri Sturluson is in order to get a punchline. It's pretty much wall-to-wall jokes: with a variety of approaches and in a number of styles, but primarily designed to entertain.

And I guess it's comforting to get some affirmation that we still know how to do that, because otherwise you -- well, you're Jerry Lewis trying to be Chaplin. And nobody wants that. 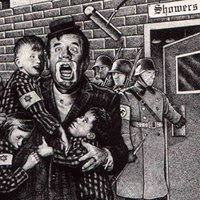 Posted by phillip low at 1:26 PM No comments: 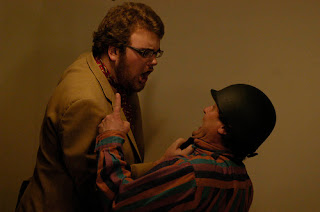 We survived -- er, completed -- a full-cast run-through a while back. To paraphrase the King of Hearts, we were successfully able to begin at the beginning, go on till we came to the end, then stop, which is a pretty fucking amazing achievement considering the eclectic mix of what we're doing, and the constraints that we're trying to do it in. Our stage manager, Erika Loen, also happens to be one of those transient photographers-about-town, and snapped a number of photographs.

A big part of what's so thrilling about this project for me is cramming together such a disparate group of personalities and disciplines in my apartment, and seeing what they come up with, as evidenced by the following: 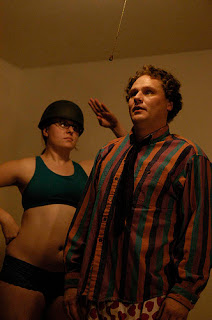 Tara King, one of the dancers from Mad King Thomas, alongside Dean Hatton. Dean's the one in the shorts. 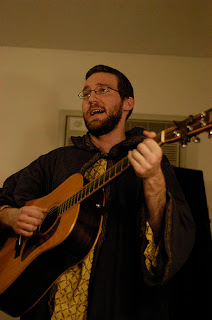 And look! Here's one of the Brothers Quetico, garbed as Bragi, the Norse god of poetry. Folk art is the new regular art, indeed.

Erika was kind enough to contribute the following notes:

When stage managing a show for Maximum Verbosity it is important to remember three things:

1) Feed the actors.
2) Never worry about being overdressed. You will be. Period.
3) Bring your camera. 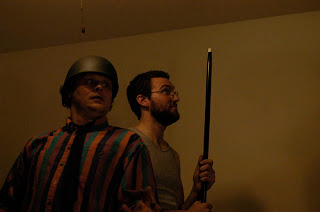 Eleven days 'til opening. Gulp.
Posted by phillip low at 9:11 PM No comments: 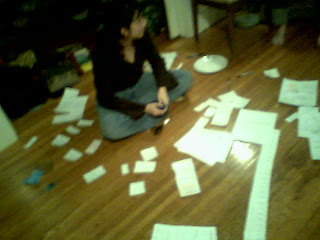 So here's a cell-phone snapshot of Monica, one of the dancers of Mad King Thomas. She's literally chopped up one of my scripts into pieces with a pair of scissors and surrounded herself with language fragments, trying to re-arrange them in some sort of dramatically dynamic way. I find this to be a pretty accurate metaphor for the whole project.

While trying to schedule and organize a cast this large (and by large I mean larger than, like, five people) has been a bit of a headache, the rewards of collaboration have been a pleasant surprise. It's confirmed what I've been suspecting for a while -- that the core group has simply become too insulated -- and working with artists who are challenging us to plow outside of our comfort zones has been a lot of fun. If I derive no other benefit from this project, it's that it's already causing me to reconsider many aspects of my existing scripts -- I'm confident that many of the gags and structural tricks introduced by our collaborators are going to work their way into further rewrites.

One interesting aspect of this project has been the conflict arising between artists of different disciplines: on one side we have a group of actors, who are very protective of the text, and on the other side a group of dancers/mimes/musicians, who regard it primarily as a means to an end. Striking that balance between textual depth and audience enjoyment is something that we've been struggling with since day one, and one thing I've been devoting a lot of thought cycles to lately.

In It's a Meaningless Life (closing this weekend, by the way!), Joe Scrimshaw opens with a story called "Christmas Carol: Year Two." It's very clever, well-constructed, with some truly inventive turns of phrase. Over the course of the past couple of weeks, he's been playing with the material, gradually introducing more scatalogical jokes here and there. Which I enjoy, but I find myself wondering: how much of the work we put into what we do is just for, well, us? All of the careful effort we put into interesting narrative and layered comedy -- are audiences just sitting through that politely until we get to the laugh lines? It's a discouraging thought. 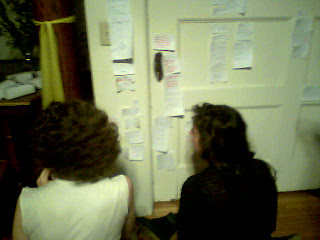 Well, I'm just as perversely pleased as a proverbial Punch and Judy show to alliteratively announce that I'll be one of the pusillanimous performers at the preliminary production of the Rockstar Storytellers. And if that dapper display of devilishly daring diction didn't dazzle you, well, tough. It's 5:30pm on a Tuesday and it's all I've got.

It's a hell of a line-up: slam master of Minneapolis Allison Broeren, who burst onto the Fringe scene this year with All the Things I Never Told My Mother; New Yorker Courtney McLean, who's recently moved to Minneapolis after touring such hits as Normal-C and Super Glossy; fellow Liberal Media Elite blogger Rik Reppe, creator of the one-man shows Staggering Towards America, Glorious Noise, and Santa Man; local storytelling heavyweight Amy Salloway, fresh off the successes Does This Monologue Make Me Look Fat?, So Kiss Me Already, Herschel Gertz!, and Circumference; and, y'know, me. All ably hosted by the extraordinary Allegra Lingo, in the greatest team-up since the Justice League of America fended off an attempt by Appellaxian invaders to turn the Earth into their own personal royal arena, equipped with deadly elemental battle-suits.

It's hard for me to talk about any kind of coherent "process," since we're still trying to figure out exactly who the hell we are and what we're trying to accomplish. It's a supergroup, though, and we're going to start finding out this Sunday at 7pm, at the Bryant-Lake Bowl. Be there or be mercilessly ostracized.
Posted by phillip low at 3:18 PM No comments: