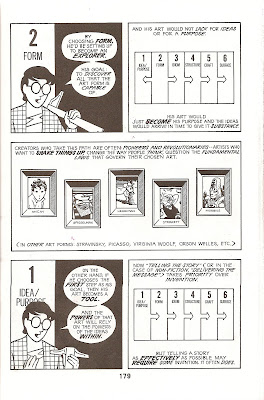 My philosophy has generally been: I'm happy to perform; I'm honored to perform; I'll take any opportunity to perform that I can get. It's been one of embracing, as it were, the very "Power of positive thinking" that I've been so critical of in my writing.

Last season, I produced a show called "Pissing on the Great Wall." I approached it with the same degree of intensity that I usually do; months of work, writing, previewing, crafting. Found a venue, and essentially said "I'll take any open slot you have." I took Monday nights. In February. And after several shows with single-digit audiences, I had to finally say: "I can't do this anymore."

Hence: season eight. It's been a bizarre process: one that began with me sitting down with various artists who had managed to achieve success at the Fringe-level world, as well as successfully producing a year-round season. For the record? I found three. And one thing that struck me: my company is older than all three of them.

The thing is, I've always placed my faith in content: if I focus on developing an excellent script, then nothing else matters. Not the costumes. Not the presentation. If I produce enough, long enough, I'll find the audience.

One of the realizations I've been making -- one of those painfully obvious ones that I have been, for whatever reason, resistant to -- is that presentation matters. If there's threads hanging off of the costumes? If the sets were thrown together at Wal-Mart? It's completely irrelevant whether the script is excellent or terrible, because those other elements are so distracting that the audience never reaches the script.

I did an audition for Theatre Mu recently. Handed my resume to the director, who expressed amazement at the sheer number of shows that I've written/directed. Which neatly illustrated the divide between various theatre arenas to me. After all, nearly all of my colleagues have written/directed that many shows; that's what Fringe-level theatre artists do. But at the mid-level theatre world, it's unheard of. It's astonishing. There's a completely different measure of success.

So I've been spending the vast bulk of my energy, in the past couple of weeks, on presentation; on graphic design; on marketing-speak. It's frustrating to me, because I feel like it's wasted time. I know it's not -- it's critically important -- but it's hard for me to avoid the observation that I'm currently spending more time talking about the shows than I am creating them.

Moreover, my process hasn't changed. I'm working on developing material, exactly the same way I have for the past eight years. The shows aren't any different (beyond the expanding level of skill that inevitably must take place). But I'm getting press; I'm getting reservations; I'm getting a different kind of response, because the presentation is different.

These are all extremely good things. But as someone fixated on content over form; it's difficult not to have some degree of resistance to it.
Posted by phillip low at 3:12 PM No comments:

some thoughts about season eight

A quick note: the following are some thoughts cobbled together for a media interview. I can't imagine that all (or even most) will make it into print.

YELLOW KINGS AND DARKER THINGS
...is, fundamentally, a double-bill of two shows; one produced by Tim Uren (The Repairer of Reputations), and one produced by myself (Quantum Suicide and Other Songs of Death).
QUANTUM SUICIDE AND OTHER SONGS OF DEATH
...is composed, primarily, from short stories composed by me from the second season of the Rockstar Storytellers (2008-2009). So the writing/directing challenge has been, for me, primarily one of taking a body of material developed for short solo performances and reconstructing them into a full-length show for multiple voices.
Upon reflection, the best description I can come up with for the show is to describe it as a kind of concept album: a collection of individual pieces that combine to elaborate upon a larger idea. The unifying theme is that of time and death; perhaps more succinctly, that of mortality. So, the first challenge was one of selection (which stories unite thematically); the second was one of arrangement. The stories have been broken down into smaller parts and re-arranged -- dropping threads to be picked up later in the performance, in an increasingly elaborate pattern of recurring storylines -- as well as having been re-written to sustain recurring images, phrases, and ideas. Perhaps particularly apropos, as one of the key themes of the show is the fragmentation of memory.
Beyond that, the challenge has been taking stories developed for a single voice and adapting them for two. In some cases that's quite literal -- simply breaking down conversations between multiple characters to create a kind of theatrical dialogue -- whereas in others, it's more expressionistic -- phrases begun by one performer are carried by another, and tossed back-and-forth in a more stream-of-consciousness style.
I've been fortunate in being able to collaborate with Elizabeth Byrd. She's the only other member of Maximum Verbosity -- other than myself -- to have been a member from its inception: she composed the music for our very first show, as well as having served as editor for every MV script. (In fact, we initially met as part of a storytelling troupe in the Minnesota Renaissance Festival well over a decade ago, so this serves as a kind of return to our earliest collaborations.) She's a classically-trained vocalist -- one who's capable of doing everything from opera to pop to jazz -- and while she doesn't *sing* in this show persay, she was absolutely my first choice as someone capable of handling some extremely heightened and stylized vocalizations.
REPAIRER OF REPUTATIONS
I can't speak nearly as eloquently on this subject -- my knowledge is limited to what I've read of the story. the script, and those few conversations that Tim and I have had about the material.
"The Repairer of Reputations" is a short story, composed in 1895, about the far-flung dystopian future of 1925. The author, Robert W. Chambers, was one whose work later inspire H.P. Lovecraft and other authors of pulp horror.
Tim was one of those authors who first persuaded me that genre fiction could work onstage -- particularly in light of the fact that the spoken-word community at the time tended to be dominated by comedy and autobiography. It was particularly striking to me to note, perusing the script, that Tim had jury-rigged many of the same solutions to adapting stories as I had -- the rapid shift between dialogue and prose, for one.
One of the major assertions within adaptation of the past several decades has been an acknowledgement of the fact that information can't be conveyed from one genre to another; critical story points have to be changed, in order to work either theatrically or cinematically. I don't necessarily disagree with this fundamental point; but I can't ignore the fact that the vast bulk of those changes seem to me to be little more than rationalization. In short, one of the reasons I love Tim is his willingness to simply ignore that convention; the assurance that authors before made their assertions for a reason, and that they're worth defending. And that those assertions maintain a surprising impact regardless.
Posted by phillip low at 12:37 AM No comments: