So I'll be performing at Britcon this weekend, a brand-spankin'-new convention focused on British popular culture. I'm expecting a lot of Doctor Who and Monty Python quotes, but when I heard about it through the pipeline it was sort of impossible not to angle for it, since I've, y'know, devoted the bulk of my career to adapting British texts.

I'm not sure entirely what to expect -- from what little I've gleaned from social media and correspondence, it looks to be running into the usual first-year chaos and damage control. Which is fun as a spectator, but a tetch nerve-wracking as a performer, insofar as I'm not really sure what I'm preparing for here -- a packed house, or three people?

I've got an hour slot, so I'll be sampling excerpts from the Camelot Cycle. Which is where a good chunk of my creative energy has been going for the past two months -- finding the right pieces, arranging and restructuring them, memorizing, and reblocking (with an emphasis on more casual accessibility -- I'll be in street clothes, chatting up the audience in between sets, et cetera).

Another reason I'm nervous is that I'm really flying in the face of conventional convention wisdom here, in terms of doing something both dense and dramatic. (One of the reasons I think I struggled to sustain a con audience is because I've so rarely brought straight-up comedy. My big geek show has some pretty hefty production values and is a pain in the ass to remount, whereas most of my solo comedy material tends to be pretty racy, confrontational, and riddled with cheap shock humor, so a tough sell for an audience that's not already seeking out that specific thing.) 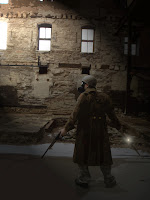 Still, I've received a lot of the same advice about the Fringe -- to quote Mel Brooks "no matter what you do on the stage/keep it light, keep it bright, keep it gay" -- and over a couple of years I've managed to carve out a space for my more weird, expressionistic stuff, so who knows? I've made my peace with my fate as a niche entertainer -- and if ever I'm going to find a body of people as obsessed with early Brit Lit as I am, it's here.
Posted by phillip low at 4:55 PM No comments: 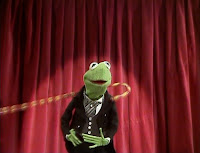 So I've been devoting some thought cycles lately to the nature of time limits in storytelling. Those limits are a thing that performers of every stripe chafe against, naturally, and I firmly believe them to be both necessary and a Good Thing: we all stumble every now and again, of course, but learning to work within those limits is a necessary part of the discipline of being a writer/performer and ultimately makes us much better at both.

I do think that they pose a unique challenge to storytellers (as opposed to, say, poets or comics) because we depend so heavily on *narrative*. Which is not to say that poets and comics don't, obviously, but arguably to a lesser degree (their chief rewards for the audience lie, I think, in other areas).

Twenty minutes feels to me about the right length for a fully embodied, self-contained story with a complete narrative. Venues that play to this are rare. Certainly I've grown more comfortable with flash fiction, with the number of open-mics that play to three, five, and seven-minute slots, but what I write for those feel to me less like short stories and more like gimmick delivery systems: that's about long enough to set up and punch a clever idea or two, not to deal with things like plot or character to any worthwhile degree. (Particularly for a writer as interested in structural games as I am. Even in the latest Rockstar shows, which typically offer 10-12 minutes, I've found myself excerpting sections of longer pieces that showcase bits of writing I'm pleased with -- giving small moments room to breathe, at the expense of contextualizing them.)

(Which is to say nothing of the discrepancy between lengths on the page and the stage. Lay out all the words spoken in an hour-long Fringe show and that's still only a few manuscript pages, well within short-story length by any publication's definition.)

I was talking with a group of storytellers last week, and this dearth was mentioned -- the fact that there's a plethora of mics where you can flash your best bits at an audience for a few minutes at a time, and there's the hour-long Festival slots, but there's not much room to work out your material in between. Oh, there's a few -- Patrick's Cabaret, for one, or Loren Niemi's Two Chairs Telling for another -- or Speak Easy Twin Cities, which I'll be performing at this Saturday.

Returning after a hiaitus (and it's been missed), the show books 2-4 storytellers in alternative spaces (garages, living rooms, etc.) I was a fan of the series in its original incarnation, and I'm delighted at its return, more delighted still to be a part of it. In true speakeasy fashion, tickets must be reserved in advance to discover its location. Looking forward to the opportunity to give the potboiler room to boil, yo.
Posted by phillip low at 3:19 PM No comments: