A six-month sabbatical from blogging? Hardly suspenseful at all.

My professional life lately has revolved around time management. In the good way, id est I've been getting hired a lot. Currently doing script work for four Fringe shows, and been developing four more outside of that. 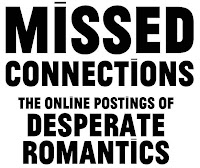 One of those scripts is titled Missed Connections, a Theatre Arlo project that's had one of the more bizarre development processes I've been a part of in recent memory: I showed up for a bunch of rehearsals that turned into script workshops and ended up walking away with a co-director credit.

The thing is, through a convoluted series of events, we found ourselves putting up a remount of a show that none of us had ever seen -- a show that was clearly collaboratively developed by an existing ensemble. A show which, by all accounts, was hysterically funny -- but what we received wasn't so much a script as it was a collection of notes for the performers. Here's a sample:

I mean, I get the basic idea here -- it's a prolonged, vocal playing-with-the-audience type deal (with a race joke in there somewhere? I guess? Maybe?) -- but it's clearly built around a comic's existing schtick/persona, and I have no idea how to play this. It's like trying to do a retelling of the Aristocrats joke based on a written description.

Likewise, the company is clearly more improv-based than we are -- many passages call for ad-libbed banter. I've spent enough time onstage to be comfortable riffing with an audience when the occasion arises, and I often do -- but improv and I have always been uneasy bedfellows, and I'm dubious of my ability to play a text that relies upon "Insert spontaneous hilarity here!" passages. (And, in my experience, this kind of schtick tends to rely upon a cast that knows each other well -- and, while our cast consists of many fine individual comics, many of us hadn't worked together before. Until, like, opening night. My point is that building a show around snarky ensemble riffing probably wasn't going to fly.)

So...what to do? Whip out the red pens and rewrite, rewrite, rewrite. Develop new schtick that's built around our particular styles and personae. Chop out the jokes that are hopelessly opaque. Pair off the actors with a history of working with each other. Give the improv routines to the comics who actively desire them. Raid the prop closet and load the script up with sight gags. Slather whatever accents and voices we have in our collective back pocket across the top, and voila! Functional punch lines!

No one is more stunned than I am that this actually seems to have worked -- the show's ended up being a pretty effective laugh machine. What were able to piece together of the underlying script appears to have had some solidly constructed structure and text, and I'd be genuinely fascinated to see the original production. I wonder how much our shows have ended up having in common.

In any case, you've got one opportunity left to catch ours: this Friday, March 1st, 7pm at the Bryant-Lake Bowl. Doors open at 6pm if you want to grab a drink. Alcohol was a critical part of our process -- why shouldn't it be a critical part of yours?
Posted by phillip low at 10:25 AM No comments: