"Then were there brought unto him little children, that he should put his hands on them, and pray: and the disciples rebuked them. But Jesus said, Suffer little children, and forbid them not, to come unto me: for of such is the kingdom of heaven."

When I was studying at Our Lady of Lourdes Catholic High School, to the delight (okay, I mean, let's be real here, to the weary annoyance) of my friends, I was known for the composition of what came to be called "phil-poems." These generally represented brief but luridly described episodes in which a hapless Jesus would stumble across increasingly depraved scenarios. Once they had served their purpose, I would fold them up and conceal them in various books around the school library, and I'm only a little ashamed to admit that there's still some part of my lizard brain that reduces me to helpless schoolboy giggling at the thought of some future student picking up a copy of The Complete Works of Geoffrey Chaucer and being scandalized by soaring verse describing Christ participating in a squirrel orgy.

The humor (insofar as there was any) came from the clash between the nobility of the savior, heightened language, and utter filth. I have apparently failed to outgrow this impulse. (Indeed, much of the comedy I find funny, from the Marx Brothers to Monty Python, revolves around applying an astounding level of artistry to astoundingly stupid things.)

"Finally he spoke: 'I'm really getting quite a kick out of this notion of playing God like a dirty old man in Skidoo. You wanna know why? Do you realize that irreverence and reverence are the same thing?'

'If they're not, then it's a misuse of your power to make people laugh.'" 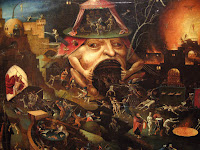 Dionysos (patron of liquor and the theatre); and, as I stumbled back towards faith, that I would find its echoes in my own religious tradition -- particularly in the Middle Ages (which is probably reason #69,105 for my fascination with that period). And I did lots of reading. I read about the many uncomfortable inversions of the Feast of Fools, and the conflict it created between the Church (body of Christ) and the Church (political machine). I read about Saint Simeon the Holy Fool, and the vulgarities in which he would indulge to mock the world of the flesh. I read Dante Alighieri and looked at the paintings of Bosch, at their many descriptions of torture and deviance and insanity, and quickly developed the suspicion that, like many horror writers before and since, their position of piety allowed them to revel in some seriously impious art. And I read a fuck-ton of the aforementioned Chaucer, with his tales of Biblical tomfoolery and anal penetration and what have you.

What I experienced while reading the medieval humorists wasn't so much an expansion of consciousness as it was a sense of recognition -- a clear sense that the sacred and the grotesque are not only compatible, but that the profane and the profound can coexist, should coexist, in some crucial way *must* coexist.

This has been occasionally bewildering to my audiences. I've had reviews of my comedy shows that criticize the apparent contradiction when I leap from a sincere expression of faith to a ten-minute sex farce. (And it undoubtedly presents a marketing problem, when patrons on the left dread the former, while patrons on the right dread the latter...) But the fact is that shock is the by-product, not my goal, and the contradiction has never really been all that obvious to me. Certainly not in all the art I've ever truly loved, with their poetry and obscenity and song and flesh and breath and divine madness.

The dirty jokes, in a way that I've been struggling to articulate for the entirety of my adult life, represent not some deviation from my faith, but its ultimate expression. And -- as someone who spends a lot of his time doing highbrow deconstructions of Malory and Thucydides and their ilk (and don't get me wrong, I love that work, too) -- I find, perversely, a kind of innocence in reaching back to touch that giggling schoolboy. Y'know...intimately.

Which is a really long windup to my announcement that, hey, I wrote another book! 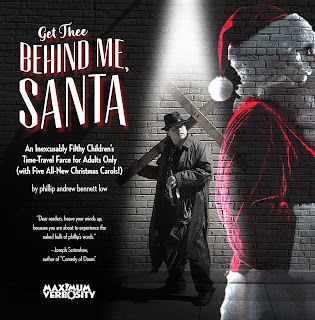 It's December 21st, 2012, and something's gone terribly wrong with the timeline. Now it's up to Saint Nicholas, a soft-boiled detective, and an unknown carpenter's son named Jesus of Nazareth to set things right in this giddily blasphemous collection of literary parodies by internationally touring storyteller phillip andrew bennett low. Fully illustrated by cartoonist Kay Kirscht, and with a foreword by comedian Joseph Scrimshaw!

Launch party November 28th at the Phoenix Theater. I don't know if my cast of drunken prophets and trickster angels will find a home with you, but I'm pretty confident that a cash bar won't hurt.
Posted by phillip low at 9:22 AM No comments: