Looks like the coffee shop I typically write these things in just shut down. Depressing.

"The last show I saw this year was Fear and Trembling. It struck me that here, in the very last slot, I was seeing the first "fringe" show of the festival: raw and uncomfortable (and I mean that in the best possible sense), it mixes observation stories from his own life with some very dark fiction. I've seen several of low's shows (spoiler alert: he's another friend of mine), and this was very different from the adaptations of Arthurian myths (his geeky obsession) and lightly fictionalized autobiographical pieces. He was doing something different. He was pushing himself, and the audience...

...I think I need to take advantage of that. To step outside my comfort zone. To do something because I wonder if it will work on stage rather than because I know it will."

I'm hugely grateful to anyone who takes the time to write something so thoughtful and generous, and I'm honored at the suggestion that something I made inspires someone else to make something of their own. Which is why I hope that it doesn't come off as dismissive when I say that the reaction I find myself struggling with is my sense that I didn't push myself nearly hard enough this year. I feel like I achieved most of my goals, and I'm wondering if that's not a bad thing.

This is the first Fringe show I've done since shutting down ensemble work last year, and if I had a primary goal it was to re-establish myself as a storyteller -- to say that, yes, the bulk of my work has been as a playwright and an actor and a director and a producer but damn it, I can still do this thing on my own.

So the great guiding note that I gave myself for this show was "simple": after coming off of a series of technically demanding shows, I kind of just wanted to grab a mike and talk for a while.

This isn't to say that I didn't work as hard as -- or harder than -- I always do, in terms of the raw investment of time and energy -- Lord knows I spent my share of time rewriting and working material and booking myself at every show that would take me -- but -- well -- it's an anthology show. An anthology show with a throughline, yes, and recurring ideas and phrases, and arranged in such a way that the individual stories balance and comment on each other, but an anthology show nonetheless, a collection of smaller pieces, and consequently can't help feeling like a step backwards from the sprawling, ambitious epics.

There's a folk belief I stumbled across during some research a few years back -- I can't recall the source now, but I'm pretty sure it was Hebrew -- that asserted that, at birth, God gives every child a limited number of words to use, and once they're all spoken, that person's life ends. It may be a bit ironic for that idea to haunt someone who pounds through words as recklessly as I do, but I often find myself wondering how many more shows I get before I die -- and was the latest a worthy use of one of them?

Which should also not be interpreted as being necessarily dismissive of this one, either -- I love this show, and each of its component stories, particularly my often-orphaned "Cable Guy" -- it contains some of my favorite bits of prose, and it's pretty rare for me to find a venue that's friendly to splatter. Just that, while it required plenty of hours of investment, the nature of the show didn't push me to much in the way of formal invention, and that always feels like a bit of a missed opportunity to me.

In any case, audience numbers were low to middling, but it seemed to be highly regarded by colleagues and critics alike. (Including, finally, the Pioneer Press, which has typically excoriated my stuff. Particularly ironic, since this is the show in which I kind of excoriate them.) Which is all par for the course for one of my shows, really. 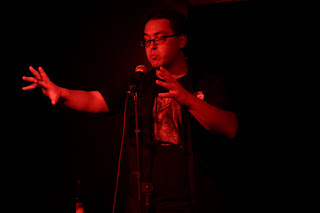 Thus end two milestones: my twentieth Fringe Festival, and my one hundredth essay on this blog. Feel free to take a look back at some previous entries, arbitrarily spaced ten posts apart:

Thursday, May 24th, 2007: The Graveyards of Culture
Poor Dad -- travelling with me inevitably means getting dragged to any number of museums. (I am, predictably, less interested in geography than I am in the human response to it.) These places are like kryptonite to his hyper-accelerated attention span. 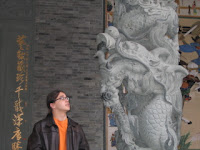 Wednesday, July 18th, 2007: Touring
Currently staying at the apartment of a friend in Ames. The Festival takes place in Des Moines, about a half-hour away, but my check-in time isn't until 3pm.

Sunday, December 3rd, 2007: Picture Post
We survived -- er, completed -- a full-cast run-through a while back. To paraphrase the King of Hearts, we were successfully able to begin at the beginning, go on till we came to the end, then stop, which is a pretty fucking amazing achievement considering the eclectic mix of what we're doing, and the constraints that we're trying to do it in. Our stage manager, Erika Loen, also happens to be one of those transient photographers-about-town, and snapped a number of photographs.

Thursday, July 24th, 2008: Ribs, Royals, and Rednecks
I don’t consider myself someone who needs a lot of flash when it comes to lodging – but it would really be a pleasant luxury to wake up in the morning and not have to scrape insect carcasses out of every moist surface in the Motel 6. I’m just saying. I’ve ended up sharing a room with our tech guy (also named Phil), which prompted the following exchange:

Tuesday, July 7th, 2009: July 4-6: Illinois
I’ve ended up driving through about a dozen small Illinois towns as part of my effort to avoid toll roads. Thanks, Tomtom.

Sunday, September 27th, 2009: Note From Melbourne
Tonight, I showed up at my venue to find a sign out front claiming that all shows had been canceled due to illness -- our venue manager was in the hospital, and unable to let anybody into the space. Because I have the most awesome tech ever, she immediately made a series of phone calls and secured us a performance space above a nearby coffee shop. Since all of my props, costume, and (perhaps most importantly) script were locked inside, the show would have to go forth without any of those things. My tech spent several minutes frantically scribbling all of her cues onto a sheet of paper so that I could use her tech script (in ten-point Times New Roman, squint) as my reference material. All of this happened in the space of approximately half an hour. 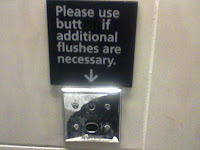 Thursday, March 1st, 2012: New York, or a New Low
So I'm sitting on an airplane again, which means that it's time to write, to try to extract some sense out of the events of the past week (or to impose a narrative upon them, depending on one's perspective.)

Thursday, May 17th, 2012: In Defense of Pulp and Splatter
So I was getting into makeup in the green room when a member of the crew came down, absolutely livid. She'd just been to the movies, and seen a trailer that offended her: a horror movie set near Chernobyl. And I was very good and kept my mouth shut (no mean trick, for someone as in love with the sound of his own voice as I am), but by the end of the rant my interest in the movie had leapt from exactly zero percent to well over fifty.

...thanks for reading, and looking forward to the next hundred posts.

Posted by phillip low at 2:30 PM No comments: