Sir Launcelot at the Chapel Perilous 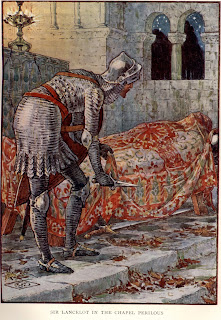 Right so Sir Launcelot departed, and when he came unto the Chapel Perilous he alighted down, and tied his horse unto a little gate. And as soon as he was within the churchyard he saw on the front of the chapel many fair rich shields turned up-so-down, and many of the shields Sir Launcelot had seen knights bear beforehand. With that he saw by him there stand a thirty great knights, more by a yard than any man that ever he had seen, and all those grinned and gnashed at Sir Launcelot. And when he saw their countenance he dreaded him sore, and so put his shield afore him, and took his sword ready in his hand ready unto battle, and they were all armed in black harness ready with their shields and their swords drawn. And when Sir Launcelot would have gone throughout them, they scattered on every side of him, and gave him the way, and therewith he waxed all bold, and entered into the chapel, and then he saw no light but a dim lamp burning, and then was he ware of a corpse hilled with a cloth of silk. Then Sir Launcelot stooped down, and cut a piece away of that cloth, and then it fared under him as the earth had quaked a little; therewithal he feared. And then he saw a fair sword lie by the dead knight, and that he gat in his hand and hied him out of the chapel.

Anon as ever he was in the chapel yard all the knights spake to him with a grimly voice, and said, "Knight, Sir Launcelot, lay that sword from thee or else thou shalt die."

"Whether that I live or die," said Sir Launcelot, "With no great word get ye it again, therefore fight for it an ye list."

Then right so he passed throughout them, and beyond the chapel yard there met him a fair damosel, and said, "Sir Launcelot, leave that sword behind thee, or thou wilt die for it."

"I leave it not," said Sir Launcelot, "For no treaties."

"No," said she, "An thou didst leave that sword, Queen Guenever should thou never see."

"Then were I a fool an I would leave this sword," said Launcelot.

"Now, gentle knight," said the damosel, "I require thee to kiss me but once."

"Well, sir," said she, "An thou hadst kissed me thy life days had been done, but now, alas," she said, "I have lost all my labour, for I ordained this chapel for thy sake, and for Sir Gawaine. And once I had Sir Gawaine within me, and at that time he fought with that knight that lieth there dead in yonder chapel, Sir Gilbert the Bastard; and at that time he smote the left hand off of Sir Gilbert the Bastard. And, Sir Launcelot, now I tell thee, I have loved thee this seven year, but there may no woman have thy love but Queen Guenever. But sithen I may not rejoice thee to have thy body alive, I had kept no more joy in this world but to have thy body dead. Then would I have balmed it and served it, and so have kept it my life days, and daily I should have clipped thee, and kissed thee, in despite of Queen Guenever."

"Ye say well," said Sir Launcelot, "Jesu preserve me from your subtle crafts." And therewithal he took his horse and so departed from her. And as the book saith, when Sir Launcelot was departed she took such sorrow that she died within a fourteen night, and her name was Hellawes the sorceress, Lady of the Castle Nigramous.

...haven't had the chance to adapt this one yet, but boy I'd like to. Have a hearty Hallowmas, y'all.
Posted by phillip low at 10:02 AM