I'm pretty sure that I've written before about one of my key revelations from my days of teaching comedy: that the students who came in with some preconceived notion of "the tragedy of the clown" almost always ended up embarrassing themselves. The more they tried to craft some sort of calculated stage persona, the more affected that persona seemed. But when they focused on problem-solving the material, on telling jokes and structuring sketches and communicating clearly, some sort of raw and interesting and compelling identity would emerge.

It made me a great believer in what I'd call an organic process. Don't think about your voice too much, just talk to the audience. Your voice will come.

I never set out to be a political comic: I wrote a bunch of sketches, set them next to each other, stepped back, and realized that I apparently was one. (I suspect that if I'd started out with the word "satire" in my mind, the results would have been pretty freaking dire.) My last book wasn't formally plotted -- I whipped together stories for holiday shows when I was asked, got bored enough to have them start sharing characters, stitched them together into a narrative, filled and chipped and smoothed until I wound up with a grotesque tale of multiversal redemption. It's not a story that I planned, or that I would have thought of if I'd sat down and brainstormed: it emerged, for lack of a better word, organically.

This is one thing that's always dazzled me about many of my colleagues: their ability to churn out catchy, marketable titles, then sit down and write a hit show that fits. This isn't a dig! Many of those scripts are superior farces. It's not drudge work, but a process that stimulates their imaginations.

I'm envious; mine has never worked that way. I typically start out with a handful of lines and images and premises that feel like they go together -- I loop them together, try to carve out a narrative that makes sense of them. Usually this falls apart. A small percentage of the time, I come out the other end with a story or a show that I really like -- a smaller percentage of the time, I find an audience that really grooves on it. (It's probably unwise for me to publicize just how much marketing is an afterthought.) Much of the past decade has been my making peace with the notion that the transformative work of genius I'm hoping to leave behind is growing less and less likely -- it's far more plausible that I'll die some weirdo tinker, churning out vulgar curiosities in his basement.

There's a great gulf between the kind of writer I would have chosen to be, and the kind of writer I ended up being. Which is a pretty rambling lead-up to the point that I never intended to be a horror writer -- but at some point, I had to step back and acknowledge that over the years, I've written a fuckton of horror. 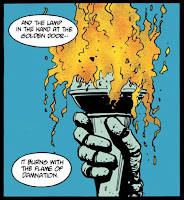 I've been wearing the "horror guy" hat for a while now, not least because I'm one of only a small handful of local tellers to consistently work in the genre. There's always been something a little strange about this for me. I'm not saying that the stories aren't horror, I'm saying that they ended up in a different place than they started. In my own heart, I'm a fantasist -- but one who believes that magic should be fucking dangerous.

Magic -- by my definition, anyway -- represents some sort of violation of the natural order. For someone as compulsive as I am, that can't be anything other than horrifying. Whether we're talking faery wells or fox spirits, no one brushes against that other world without being transformed, and nobody walks away unscathed. A sip of those waters is loss and madness and terror, and transformation is a lyrical word for death.

Jonah heard a voice of power on the wind, and ran for his damn life -- I'm saying that that impulse makes complete sense to me.

So if my intent wasn't moralistic, what's the moral that I found? When I laid the stories out end-to-end, I discovered (and, uh, spoilers for, like, half the stories in the collection, I guess) that apparently my favorite twist is a protagonist who discovers that they are, or is revealed to be, the monster of their own story. (Hence the title.) What that says about my own psyche is probably best left to others.

In retrospect, it's not all that surprising -- while there is great peril in excessive self-analysis for the organic-process guy, from my point of view, one of the major dominating themes of, like, everything I've ever written has been the problem of sin and redemption. This is probably unsurprising from a Catholic author.

Redemption is challenging to write about -- nobody deserves it, and we can't survive without it. Vengeance is always more appealing, but its end is always despair.

Ego and appetite are both obvious and omnipresent. Redemption is, at best, a tortuous, lifelong process. Worse, it's both tedious and unromantic. Falling is more thrilling than climbing, after all, and there's a reason more people have read the Inferno than the Purgatorio. But someone resolving to try to make that climb -- someone planting their foot and taking one meaningful step upwards -- I believe that to be worthy of a story or a song.

These are the stories of those who fell. 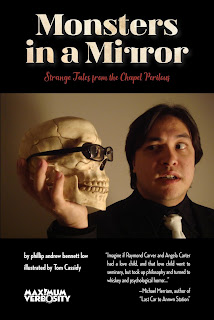 There is an imperfection in the human mind - a crack, a flaw, a crevice - one that fascinates and repulses all those who find it. It is empty of all but impulse and appetite and the memory of hope. What if you looked over the edge? What if you fell? And after the fall, what would you see in the mirror?

Dragon shadows, bleeding statues, wolf dreams and time machines - your biological clock is ticking, and it's time to get metaphysical in this twisted cabaret of the macabre. This is the road map to your own personal inferno, fondly dedicated to everyone who is dying...especially you.

Fully illustrated by artist Tom Cassidy, and with a foreword by author Michael Merriam!

WARNING: contains tales of horror and dark fantasy, and consequently some disturbing, violent, and sexual imagery, including descriptions of sexual assault.

Launch party this Friday at Strike!